Today I'm over at The Novel Approach helping celebrate their fifth blogiversary, and I showed up bearing presents! Stop by to congratulate them and also to enter my giveaway. It includes an Amazon gift card, ebooks, and two sets of signed second edition paperbacks of Six Degrees of Lust and Six Degrees of Separation. See you there!


So, on this crappy Monday I thought I'd try to lift my own spirit by sharing one of my favorite Puerto Rican Christmas traditions. This is a video of a "parranda" which is basically Christmas Carols on steroids. The "parrandas" get organized at someone's house, then a bunch of people (never less than twenty) who happen to play all kinds of instruments show up at somebody else's house not earlier than two in the morning and wake you the heck up. Then the party start, and people sing and sing while the "host" cooks traditional food for them, usually asopao de pollo, which is like a rice chicken soup. Awesome times! <3
#TVD #boricua #boricuastyle
Posted by Taylor V. Donovan at 11:20 AM No comments:

Tweaked, updated, longer, and better, coming at you from Dreamspinner Press on January 2, 2017.  Check it out!
Six Degrees of Lust
2nd Edition
By Degrees: Book One
New York City FBI team leader Samuel Shaughnessy lives for his immediate family and his job. After a marriage gone wrong, he has stuck to a firm rule when it comes to relationships: he doesn't have them. Sexually active and emotionally unavailable keeps him satisfied, especially now that he is in hot pursuit of a serial killer targeting gay men.
Former firefighter Machlan O'Bannon now manages a successful sports bar in Houston, and after years of waiting, he’s ready to stand up and be the man he always wanted to be: out, proud and drama-free. His politically-aligned family wants to keep him locked in the closet, but Mac just wants to meet the man of his dreams.
One man is as high strung as the other is laid back. A chance meeting brings them together, and one night of passion ignites a fire neither can fight. Their lives are not only miles apart, but as different as day and night. They don't want to get involved, but they might not be able to keep apart. 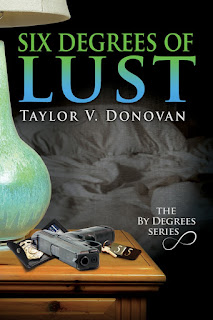