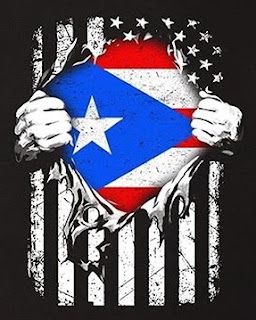 Every year, Americans observe National Hispanic Heritage Month and celebrate the contributions, histories, and cultures of American citizens whose ancestors came from Mexico, Spain, Central and South America, and the Caribbean. This originated back in 1968. First it was only a week, then it was extended to a month by President Ronald Reagan in 1988, a year before I graduated from high school. I was seventeen at the time. I was American, having been born and raised in the Commonwealth of Puerto Rico, a territory of the United States. Yet the first time I heard about Hispanic Heritage Month was around 2010, a full nine years after moving to New York, and it got me thinking about my own heritage and my country’s past.

Puerto Rico’s diaspora in the mainland USA is huge. We represent ten percent of the Latino population and are the second largest Hispanic group after Mexican-Americans. Our guaranteed citizenship allows us to travel back and forth on a whim, which most of us do, making migration an everyday thing. Growing up, I didn’t know anyone who didn’t have family members ‘allá afuera,’ meaning living here in the U.S., or serving in the Armed Forces. As a result, there are 3.5 million of us back home and 5 million of us here, and, let me tell you, when I arrived in NYC, I could’ve sworn all of us lived in this place.

The first thing that caught my attention was the flags. Sure, there were almost as many ‘restaurantes de comida criolla’ (Puerto Rican food restaurants) as there were Starbucks. I could also hear our very particular version of Spanish spoken wherever I went, and I heard salsa and reggaetton music blasting from cars often enough. But it was the constant display of Puerto Rican flags that got me emotional and made me wonder the reasons behind the passionate, over-the-top need my people have to let everyone know where we are from. Not for too long, though. I was busy getting settled, so I just assumed it was national pride and brushed it off.

Fast-forward to 2010 and the moment my daughters had to bring a traditional dish to school for the Hispanic Heritage Month potluck. They had to write essays on what our country of origin has contributed to American society as well.

The kiddos immediately mentioned what most people here are familiar with—famous Puerto Rican singers and entertainers like Jennifer Lopez, Ricky Martin, and Marc Anthony, who have contributed to the arts. They knew about Nydia Velázquez and Luis Gutierrez, Puerto Ricans serving in Congress…about Sonia Sotomayor, born to Puerto Rican parents and the first and only Supreme Court Justice of Hispanic American heritage. They knew about Roberto Clemente, a Hall of Famer and one of the most celebrated and renowned baseball players in the world…about all the boxers hailing from Puerto Rico, and even Gigi Fernández, who won two Olympic gold medals representing the United States, and is the first Puerto Rican to be inducted into the International Tennis Hall of Fame.

So I told them about our very own Dr. Antonia Novello, the only Hispanic woman to serve as Surgeon General of the United States. About Rita Moreno of ‘West Side Story’ fame, one of the few performers to have won all four of the major entertainment awards: Emmy, Grammy, Oscar and Tony. About astronaut Joseph Michael Acaba, one of the most distinguished members of the American space crew with a few missions under his belt, and Anthony Romero, the president of the American Civil Liberties Union (ACLU), an organization promoting freedom and justice for all American citizens, no matter where we live. And let me tell you, the more I taught my daughters about all these wonderful people, their accomplishments, the fields they have impacted, and all their contributions to American society, the prouder I felt about Puerto Rico’s ability to produce so much talent despite its size, and the more I thought about that flag.

And, me being me, I needed to read on it. I had to find out why my people are so emotionally attached to our flag, and why our anthem, ‘La Borinqueña,’ and songs like ‘Que Bonita Bandera’ and ‘Preciosa’ always bring tears to our eyes. I did, and now I’m going to share some of our history with you.

As you may or may not know, Puerto Rico has been a territory of the United States since the end of the Spanish American War in 1898, and we were made citizens in 1917. We are a hybrid society with a unique ethnic and cultural fabric that comes from our Taíno, Spaniard, African American, and European heritage and traditions that’s quite different from mainstream American culture, yet we are very much Americanized. Worth noting is the fact that this applies to both mainland and Puerto Ricans on the island. Recounting everything that has happened since we were colonized then ‘gifted’ to the U.S. would take months. Suffice it to say, the United States government considered us inferior—almost savages, and incapable of governing ourselves. So they decided to do it for us, and they did their best to turn us around and make us like ‘you.’

No Spanish. No Catholicism. No National anthem. No flag.

Public Law 53, the Gag Law, was passed in 1948, forbidding us from owning a flag, uttering a word in favor of independence, and singing ‘La Borinqueña’ on top of everything else. For a long time, owning a flag was a felony, and any Puerto Rican who dared do so would go to jail for ten years. Every day, the FBI and the Insular Police would raid people’s homes, searching for flags. In November of 1950, 3,000 Puerto Ricans were hauled off to jail in one week alone. Some of them weren’t even ten-years-old.

It took nine years to repeal Public Law 53. The very next year, the first Puerto Rican Day Parade was held in New York City. It was 1958. Puerto Ricans took to the streets en masse, marching through Manhattan, singing Bomba and Plena songs and, you guessed it, waving those flags with pride. I’m sure I don’t need to tell you that we haven’t stopped.

A hundred years after becoming American citizens, Puerto Rico remains a colony of the United States, and, albeit fighting tooth and nail to preserve our culture and traditions, we are loyal to the mainland. As previously mentioned, we have contributed musicians, athletes, chefs, scientists, politicians…the list goes on and on, but that’s not all.

Puerto Rico is a crucial part of the United States economy. It produces biotech products and thirteen of the world’s top-selling brand name pharmaceutical drugs. Our territory also defends what’s known as America’s third border, aids hindering drug trafficking incoming from South America, houses several military facilities, and is home to parts of the nation’s ‘Over the Horizon’ radar system, which allows the Unites States to maintain control over a wide range of aerial and marine areas of the Western Hemisphere. And last but not least, we have ‘contributed’ our men.

Thousands of Puerto Rican soldiers have fought for the mainland’s ideals. The 65th Infantry Regiment, nicknamed Borinqueneers after the indigenous Taíno name for Puerto Rico, Borinquén, was the first Hispanic segregated group in U.S. history. The soldiers couldn’t vote for the president, but they fought during World War I, World War II, and in the Korean War, for which they received a Congressional Gold Medal. Needless to say, we honor the American flag along with ours, and bury our troops along with yours.

I can’t speak for other Hispanic people living in the United States but I can tell you that being Puerto Rican here isn’t easy these days. I work, I contribute to society, and I am proud of all the ways in which we have helped this nation being what it is, all while trying to understand why my people are treated the way we are.

My name is Taylor V. Donovan. I am Puerto Rican. I am American. And, just like every Boricua, born here or on the island, I’m neither from here nor from there in most people’s eyes. Ni de aquí, ni de allá, but both places hold my heart.

Posted by Taylor V. Donovan at 1:12 PM No comments:

Interview with yours truly in this month's Queer in Color newsletter about my upcoming release, 'Forces of Nature.' Here's a snippet. 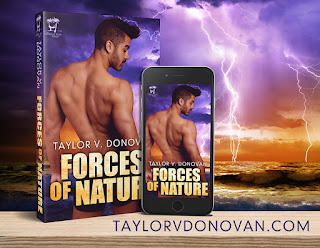 QIC: What inspired you to write this story?

Taylor: The inspiration for ‘Forces of Nature’ was Puerto Rico’s financial crisis and Hurricane María which, as everyone knows, devastated the island. I wanted to explore how unemployment has separated families and contributed to the ever-growing diaspora and why most of us can’t wait to get back home.


QIC: How did your characters come into being? Were you inspired by your own life experiences, by travels, someone in your neighborhood, etc.?

Taylor: I can’t deny there’s a little bit of me in Saúl Cartagena Toro. Having moved to the United States seventeen years ago, I’ve dealt with homesickness, the pain from being away from my family, and the frustration from not being able to help as much as I wish I could when something happens down there and I can’t hop on a plane right away. I definitely shared some of my experiences with him,

QIC: What makes your story and/or characters unique and interesting?

Taylor: Culture. I didn’t shy away from showing the good along with the bad, nor from portraying my people just like we are.

Go check out what else I had to say, and don't forget to subscribe!