From Six Degrees of Agony, Here's a Little Taste of Christmas

*Re-post from Live Your Life, Buy The Book.

When Barb asked if I’d like to participate in Live Your Life Buy the Book’s Advent Calendar Event I immediately said yes. Christmas is my favorite time of the year and I always want to celebrate. I didn’t write a Christmas story though, so I wasn’t quite sure what to present to you all. At the end I decided on a little snippet from the third installment in my “By Degrees” series. What you’re about to read takes place in the timeline of “Six Degrees of Agony” a few days before Christmas. Hope you enjoy it, and Happy Holidays! 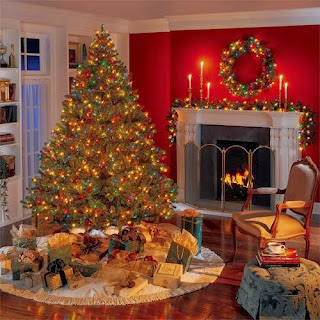 “I think me and the twins went overboard decoratin’ the tree.”
Sam glanced at the gigantic Christmas tree in the corner of Mac’s family room. He made an honest effort to assess the amount of angels, stars and Santa Clauses before his attention was diverted by the sight of his boyfriend’s naked back. “Looks great to me,” he declared, not sure if he was referring to the Christmas tree or the play of muscles in motion as Mac repositioned the satin red bow topper.
“It has too many ornaments.”
Sam grabbed a can of whipped cream from the fridge and two saucers from the cupboard. After three months of hanging out at Mac’s place whenever possible he knew where Mac kept his stuff and never had trouble finding anything. He felt as much at home in Mac’s house in Houston as he did in the New York apartment and his own house, and he liked it.
“So?”
“So it looks like… I don’t know... It’s probably too much.”
Sam rested his elbows on the granite countertop and watched Mac take out a few ornaments.
“You’re right. There are too many ornaments. But the twins were over the moon with excitement, and you had a blast fondling and hanging those balls,” Sam quipped. “Who gives a shit if the thing would never win a Best Christmas Tree contest?”
Mac shot him a playful glare over his shoulder. “Why didn’t you say anythin’?”
Because Mac in dad mode was a thing of beauty, and Sam had been too busy enjoying his first full night with Mac, Austin, and Emma Rose to notice. Besides, the sense of rightness and belonging was so overwhelming that for a minute there—or an hour—Sam had been afraid of turning into a maudlin idiot if he dared open his mouth to say something ,even if he had noticed the ornament vomit.
“I thought excess was the order of the day,” he told Mac in a teasing tone, looking pointedly at the cookie sheets on the other side of the counter. “How many of those we baked and decorated again?”
Mac grinned. “You ate an entire batch by yourself.”
“That’s so not the point.” Sam opened a bag or marshmallows and rolled his shoulders. “My back still hurts from spending the afternoon helping you wrap a thousand presents. I could use a body rub.”
“I didn’t buy that many things and you don’t have to pretend you aren’t feelin’ emotional. It is a big day.”
“Okay, so maybe it was five hundred boxes that we wrapped.” Sam wiggled his eyebrows and ignored Mac’s remark. He wasn’t surprised by it, though. He had never been able to hide his feelings from Mac. “Can I still get a body rub?”
And a body rub was all it would be, regardless of how badly Sam wanted to bury himself in Mac’s tightness and drive his crazy with pleasure for the rest of the night. Austin and Emma Rose were sleeping upstairs and there was no way in hell Sam would engage in any kind of sexual activity while he, Mac, and the kids were under the same roof.
Not when Mac was taking a huge risk by having a family night with his kids and boyfriend when he was still married to his kids’ mom.
Not when Amy could—and would—use anything at her disposal to drag things in Court.
Mac chuckled, snapping Sam out of his thoughts, but he was frowning when he turned 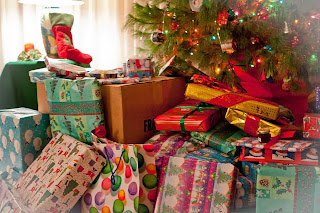 to look at the boxes underneath the tree. “Do you think it’s too much?”

Sam’s voice was gentle when he said, “I counted fifteen presents per kid before giving up.” There was no denying Mac knew no limits when it came to giving stuff to his kids.
“That’s not too much,” Mac said with a shrug.
“That’s entirely too much,” Sam disagreed, and even though he didn’t want to open that particular can of worms, he found himself asking, “Are you trying to overcompensate for something?”
“No.”
“Liar.”
“I think you’re right.” Mac took one of the ornaments and put it back on the tree. “We had a great time decoratin’ it, and that’s the only thing that counts.”
Sam sighed at Mac’s blatant attempt to change the subject.
Mac walked over to the kitchen, pecked Sam on the lips, put several cookies on a plate, and kissed him again, this time on the back of his neck. “Is that cocoa about ready?”
Sam sighed again, but decided to let the subject go for the time being.
Not that he had an option.
“What’s your favorite Christmas memory?” Mac asked the second Sam entered the family room carrying two mugs of homemade cocoa topped with marshmallows and whipped cream.
He handed Mac one of the mugs and lowered himself slowly onto the extremely comfortable sofa before answering the question.
“The yearly four-hour roundtrip from Brooklyn to a farm tree in Monticello to cut our own Christmas tree,” he said, eyes fixed on the multi-colored twinkling lights of Mac’s tree.
No.
Their tree.
Mac had told him it was their tree; his, Sam’s, and the kids’.
“Family tradition?” Mac sat next to him and hooked one leg over Sam’s before taking a sip from his mug.
“I remember Dad would say to me and my sister, “It’s time to go get our Christmas tree,” year after year on the same date. December 1st.” He smiled and looked at Mac. “You know he was a cop and worked pretty irregular hours, so we hardly ever got to go on December 1st, but Sandy and I knew we wouldn’t have a long wait. Dad always cleared the first Saturday after December 1st to drive us to Monticello, come hell or high water, or even a blizzard, and we’d help choose and cut the biggest tree in the farm.”
“Sounds like lots of fun,” Mac said with a sweet smile.
“It was.” Sam returned the smile and rested his head on Mac’s shoulder. “They had a petting zoo and even sleighs for rides when the weather cooperated, then we’d drive back home and stay up until the tree was fully decorated.” He drank some of his hot cocoa before setting the mug on the coffee table. “By the end Dad couldn’t help much,” Sam added in a somber tone. “He was only in his sixties when he passed, but his arthritis had gotten so bad he couldn’t lift any weight in the warmest of days, let alone in the freezing cold, but we still went to Monticello every year to get our tree.” He sniffled and traced Mac’s thigh with his fingertips. “He passed away in May of 2004. I haven’t been back to the farm since December of 2003.”
“That’s a beautiful memory...” Mac sat his mug on the coffee table, took Sam’s hand in his, and kissed it tenderly. “My family never did anything so special... Hell, we never did anything at all. Christmas was all about entertaining influential acquaintances and talking them into donating money to Dad’s political campaigns. I was often left to the care of the maids.”
“I’m sorry, kitten.” Sam ran his fingers through Mac’s hair and pressed their foreheads together. “That must’ve sucked.”
“It doesn’t matter anymore.” Mac caressed Sam’s T-shirt covered chest as he added, “Next year I’d like you to drive us to that farm in Monticello to get our tree. It’s a beautiful tradition, and I want to revive it as soon as we can. We’ll ask Margaret if she’d like to come with us... and maybe Sandy, too.” He kissed Sam, then leaned back and looked him in the eye. “Sounds good?”
“Sounds wonderful,” Sam said with a huge smile. 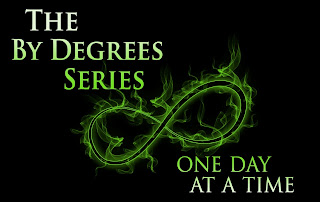 Is that time of the year when the members of the MM Romance Group over at Goodreads vote for their favorite stories and I am thrilled to announce my work was nominated in a few categories. Here's the breakdown:

Thank you guys for reading my stories and if you feel like showing your love here's the link to vote! 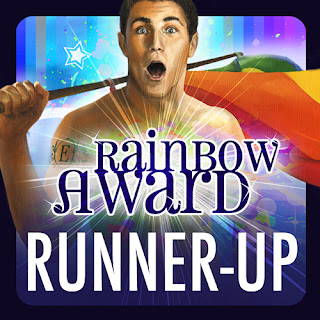 More than 150 judges read 400 books, give or take a few, and the Rainbow Award Winners are in.

This story means the world to me. It wasn't easy to write and it most certainly isn't an easy story to read. The message is not "all you need is love", or "love fixes everything", but one of courage and perseverance, and how sometimes it is worth it to bend over backwards for the person we love, even if others can't understand what we see in them or why would we bother.

Thanks to my friends (you know who you are) for holding my hand throughout research and development and thank you for the pep talks once the manuscript was out of my hands. Thanks to the reviewers for your encouraging first reactions and thoughts on the story. Thanks to all the readers that took a chance on Cedric and shared his journey. And thanks to Elisa Reviews and the Rainbow Awards team. This is awesome!
Posted by Taylor V. Donovan at 12:47 PM 1 comment: